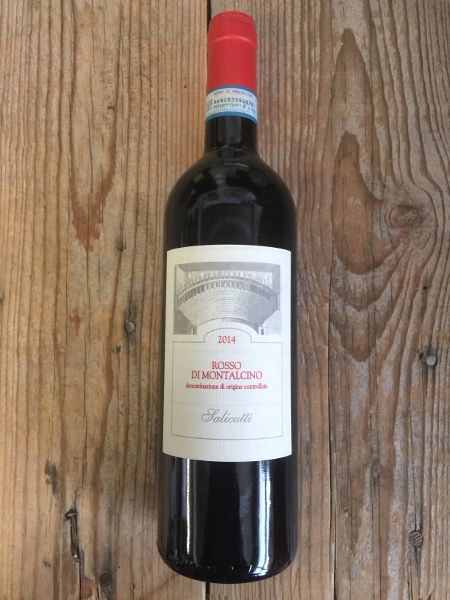 Salicutti usually produces about 440 cases of their Rosso every year, from a single vineyard parcel called ‘Sorgente’. That makes it tough to get a large allocation. However, in 2014 proprietor Francesco Leanza declassified his Brunello and blended it into the Rosso. That more than doubled overall production, increased the quality of the Rosso, and boosted our chance at getting a sizable drop! Hopa! Vineyard ages across all the Salicutti parcels include blocks planted in 1994, 2001, and 2007. Details for harvest, fermentation, and aging are difficult to find in a vintage like 2014, but normally the Rosso goes through stainless steel fermentation and maceration of nine days, is aged in five hectoliter French barrels for 18 months, followed by bottle aging for an additional six months before release. Pair that alongside penne pasta with garlic and pancetta, or white bean and mushroom tomato sauces. Don’t forget the Asiago!

Label I.Q.: Rosso di Montalcino was established as a DOC wine in 1984 to allow producers to craft a 100% Sangiovese from the same vineyard region, but release it a bit earlier, only requiring six months in barrel and 1 year of total aging before release.