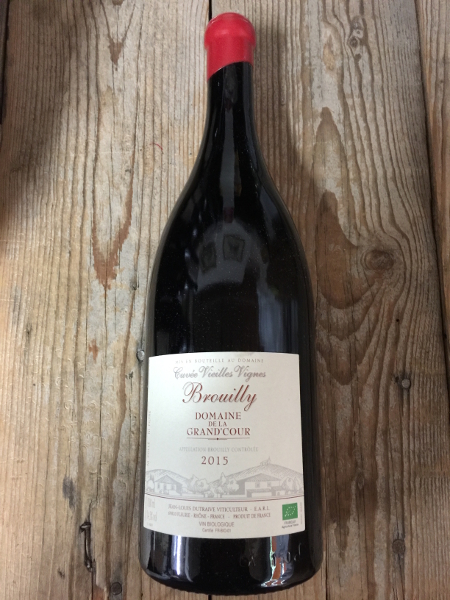 While the domaine of Grand’Cour has been in the Dutraive family since 1969 their recognition in wine circles has elevated to Himalayan status over the past five years. We are certainly all in favor of great producers getting recognized after decades of hard work, but it does slim out the allocations as the word spreads.

Jean-Louis Dutraive has earned countless accolades for the quality wines he is releasing. If you are curious about Beaujolais you should take advantage of this release and get a few bottles while they are available.

Certified organic by ECOCERT in 2009, the estate of Domaine de la Grand’Cour was founded in 1969, by Jean Dutraive, making it one of the oldest in the village of Fleurie. His son, a fifth generation vigneron named Jean-Louis joined his father in 1977 and by 1989Jean-Louis was fully in charge of the family holdings.

Let us take a quick moment to appreciate that time span of the family mentor teaching their protégé on the terroir, harvest, cellar work, off-season, quarks, and secrets of the domaine's vineyard holdings.  From 1977 to 1989 (twelve years!) Jean-Louis worked under his father to soak up every nugget of knowledge that would help guide his time as head of the domaine.

The Brouilly Vieilles Vignes is from a 50-year old parcel on a small hillside.  No sulfur is added during fermentation and they perform a soft foot pressing that is gravity fed into the foudres for aging. From the early notes I have read the common theme is black fruits, full bodied, and very complex.